After my fire-and-brimstone sketchbook post the other day I thought I would post most sketchbook drawings here on the blog. I don’t have dates for all of these–I know that they are all Clarksville work though.

Fae Trooper: Uniform design for a shared universe my son Conrad and I have worked on.

Brule: Another one for Conrad; I think he was going through a King Kull phase 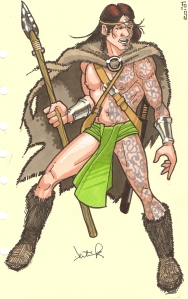 Batgirl: While I applaud DC’s daring for their recent 52 relaunch, I was less than thrilled with the way storylines in so many books were just chopped off with the literary equivalent to a rusty machete. 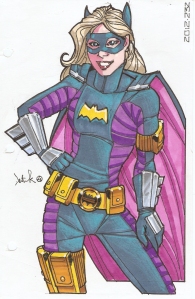 Slinky Girls: Lori and I have a deal. I can draw what I want in my sketchbook, but she gets to edit it….which means it stays PG-13. I am fine with that – leaving things to your imagination .

I also want to point out  that while it is true some of these outfits look like they were made in a belt factory, none of these women are weak in any way. All the drawings were done on 5 1/2″ X 8″ sheets of paper using pencil, gel pen, design markers and a bit of paint. (The trooper was a little larger). The two slinky girls were done on a toned paper with white paper affixed at the appropriate points with spray adhesive. None of the drawings took me longer than an hour to complete.