This is one of the better “economical” promotional pieces I produced in between the labor-intensive color cards. Rendered on an 11″X17″ish piece of medium weight illustration board the figure depicts my version of a House Hostigos rifleman from H.Beam Piper’s classic alternate history novel Lord Kalvan of Otherwhen.

After shooting a stat for use with the card I added color with via watercolor, ink wash and airbrush and put it in the very same art show it advertised…and was promptly snapped for the immediate sale price early in the convention.

While I was heavily involved with Space:1889 the bulk of my work involved conceptual design rather than cover paintings, so when I did get a cover it was a real treat.  One bit of trivia – I used myself as a model for the erstwhile Naval Landing Brigade lieutenant, which was kind of neat as at the time I was serving in the U.S.Navy Reserve as a Restricted Line (Intelligence) officer….with the rank of lieutenant!

Technical notes: Acrylic on 16″X24″ Masonite panel. It was my first cover painting rendered without the use of an airbrush. It was pretty much a Christmas vacation produced in Sterling over the late December ’88 /early January ’89 time frame and shown at BOSKONE a month or two before print.

As an ardent Gerry Anderson fan I had to wince a bit at the use of ‘Space: 1889” as a title for the game series – I was never sure what the intent was in the play off the title of Sir Gerry’s Space: 1999 program.

I normally don’t share the “letter pages” – the left-hand side information that supplements rather than tells the story – but this drawing turned out kind of nice. It’s a pirate sub by the name of Crimson Cod and is central to a plot twist in DKJ&SS.

Latest installment – but lacking captions, logo etc. I don’t have a 11″X17″ printer/copier so I had to tile the image from multiple smaller prints – hence the  are also some obvious mismatched areas  I’m also trying to brainstorm a way to enhance the  aerial perspective as seen  out the window without the linework washing out completely in some places. 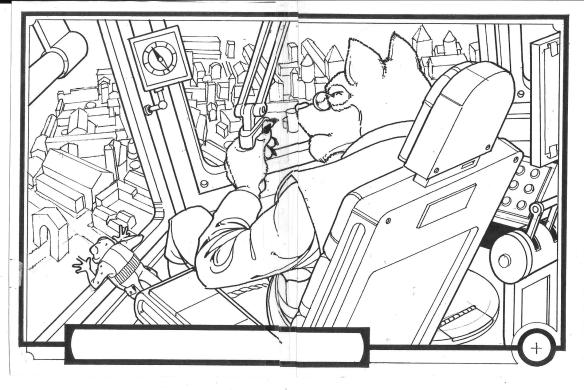 The only thing better than the stuff Sir Gerry Anderson and his crew thought up is tweaking the details. I love retro-designing vehicles and costumes and when I was dusting some of my “trophies” in the sitting room I got the idea for a uniform for the Moonbase ladies had SHADO been organized in 1908 instead of 1980. 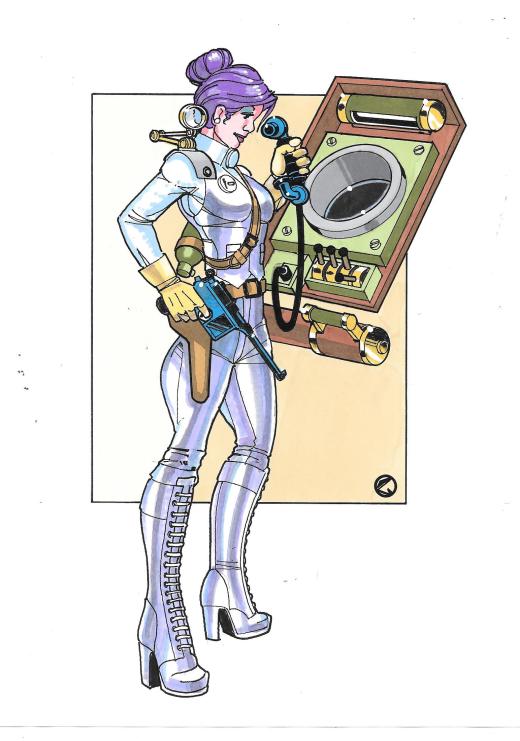 As I wrote previously I am in the middle of a book project entitled “Dog King John and the Stolen Syrup”.  The story behind the project has more twists than an M. Night Shymalan script but basically involves my efforts to stay involved with my grandchildren through sketch cards I send to them each month.

I’m replacing the individual cards with pages from a book I’m writing for my wonderful mob of grandkids. If everything works according to schedule the book will be done third-quarter 2019 and will be available for purchase via a Kickstarter campaign at the time. Until then I will periodically publish occasional pages like this one:

Some artists grumble about cropping work for these mastheads but I kind of like the format. My Beautiful Saxon Princess and I did field-of-vision  research in the late 1980’s  and found out that this lengthy horizontal format is closest to how humans take in their visual environment  – which leads me to speculate on whether that is due to humans moving as pack animals or a result of the same.

Consequently I went through a “long-skinny” phase in the early 1990s so in addition to what I previously posted there are two more “long-skinnies” in existence, but I am not sure if I can get useable imagery . In the thirty years since I first started painting in that  format we’ve moved five times while simultaneously going through more computers/hard drives that I care to remember – long story short: there’s   a lot of work I just don’t have access to.

There’s also the impact of technological change : from 1970 to 2010 I recorded my work on 35mm slides but eventually I had to concede defeat and shift to digital media. Unfortunately there aren’t too many service bureaus left that can work mountains of 35mm slides I have stacked all around my studio.h 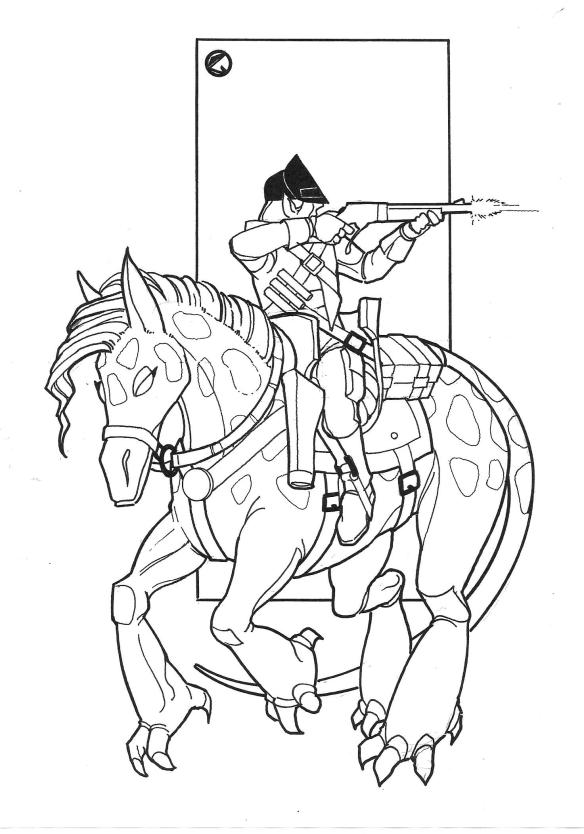 There were times when working as a professional in the adventure/RPG market put me at a disadvantage as a player. I was so involved with producing art for product lines like Traveller, Space:1889 and Battletech that I missed out on other  games I would have like to play – or just read about. One of those was Spelljammer, a game line I still know very little about other than it was a TSR product and concerned  a lower-tech level civilization  with space ships that relied heavily on magic use.

…so my interest was definitely piqued when my son Conrad approached me in  the late 1990s  about “conjuring up” visuals for such a setting – for characters he called Fae Troopers. One of the images has seen a lot of use on my rate card for marker renderings but for the most part they just help fill up sketchbooks. Today’s drawing is my version of one of those troopers that moves via horseback…or perhaps more accurately Uintahtherium-back

Earlier in my career the female face and figure was not my forte – I was much more comfortable drawing guys and even more comfortable and adept at drawing vehicles and hardware than either gender.  All that changed in my mid-to-late thirties, which I attribute to living with my beautiful Saxon Princess – inspiration like that couldn’t help but improve those skills.

So here is the dilemma: do I always want to draw my female characters as beauty queens  – or as we refer to them in the studio “slinky women”? One school of thought pushes for a wider range of faces and figures or as one former student said ‘Women that don’t look like they have “Mattel” stamped on their a**”… but every time  I tone down the glitz I get negative feedback from somewhere.

Up to this point as I have been working on the Gun Kingdoms 3 I’ve following the “slinky women edict” but for this figure I went with someone more true-to-life. Actually, she is based on a real person – a teacher from my high school. I didn’t have much in the way of reference ( just an old yearbook picture) but I think I captured the basic look. She’s wearing a diving suit so there were plenty of ways I could have vamped her up but I kept everything fairly utilitarian. 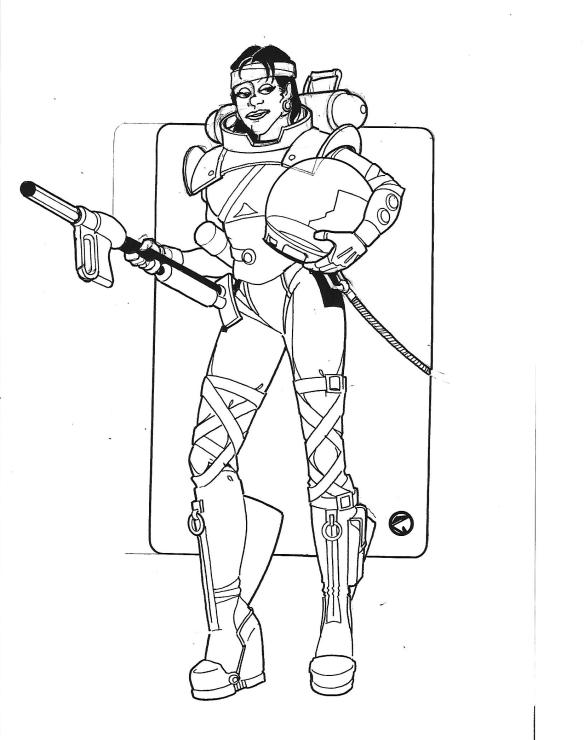 This was an unmitigated knee-jerk reaction to the name Scott came up with for our villain. The first time I saw the name”Dusker Trinidad” in written form I had to stop and say it aloud to myself – I immediately envisioned a large islander much like Dwayne Johnson (“The Rock”).  Try as I might I cannot see him as ‘SsCaArRyY! but neither do I see him as a particularly benign person. Amoral and hedonistic but not a jerk about it.

He reminds me of an Islander friend named Jim that I knew at Ricks College .  Jim was a service brat just like I was which meant that it was no surprise that we ended up enrolled ROTC together. Towards the end of that semester I went through a very unhappy upset and when Jim found out about he simply asked if I wanted him to find the other guy and “mess him up”.  No emotional heat involved but rather accomplishing a task for a friend and I am glad that I passed on the offer because

If I get too detailed or mission specific with these designs it often robs the character of…well >character< so with this rendering I stressed the “pirate” part of “submarine pirate captain”. Bits and pieces of his clothing deliberately resemble the uniform Skylla started wearing in “Airship of Fools”; I did that to build in a little ambiguity that Scott can pick up and run with if he so desires. I also have on my check-list one of his crew-members garbed in gear more fitted to “20,000 Leagues Under the Sea” or “Das Boot”.

…and as for the pose? Long story involving a very funny story about The Avengers movie and the way Black Widow as posed versus the way the guys were posed.