“Are you sure you don’t want to add another support on the front:

“You may want to consider adding that support to the front. Conrad is starting to walk, and he may grab onto it and – “

A reply of ultimate snarkiness was on the tip of my tongue but as luck would have it my Beautiful Saxon Princess chose that moment to step in and inform us the coals were just right for barbecue and took her father by the arm to start grilling. I shot a dark look at my father-in-law’s receding form: It was bad enough that in two days I’d be facing a medical board ruling my flight status without getting a critique on every second nail I drove into MY bookshelf…but then he was a civilian paper shuffler and hadn’t a clue about my situation, or ( I suspected) a care.

“David, are you sure you don’t want to go with us?’

“ Did I tell you that we got a new engine for the boat and new upholstery for the seats?

“Did you see the forecast? It’s going to be perfect weather”

“ David are you sure –“ at which point my Beautiful Saxon Princess (well aware of the signs of an impending eruption of Mount David) stepped in with a Bundt cake to distract her father from his efforts to persuade me to join in a water-skiing expedition that afternoon.

I sat back and reached for an unbroken pencil and fresh sheet of paper. He didn’t have a clue – I was hanging on by my fingertips to an MFA program with an open hostility towards middle-aged professionals who also happened to hold reserve commissions in the military. My young family thought of the trip to my in-laws as a vacation but I definitely needed time to work on a research paper on Tlingit raven rattles, a topic that was both politically correct enough to get me through the semester as well as obscure enough to discourage thorough examination.

“David, are you sure you want to measure out the stud lines from that wall”

“David, don’t you think we should measure out from this end”

“No Dad. Measuring from this end puts most of them under floor joists”

“David are you – “ at which point Fate in the shape of My Beautiful Saxon Princess intervened with a tray of sandwiches and drinks prompting me to drop the hammer that I’d been gripping hard enough to emboss fingerprints.

Parley LaMoine Howell passed away a few days ago, joining his wife and sweetheart Velma who’d made her own exit from the earthly stage a little over a year ago. Despite the Huntsville (AL) venue we were able to participate in the funeral via a Facebook Live broadcast (take that mean old Mister Coronavirus) and as we sat in the studio listening to the services several conclusions came to mind: 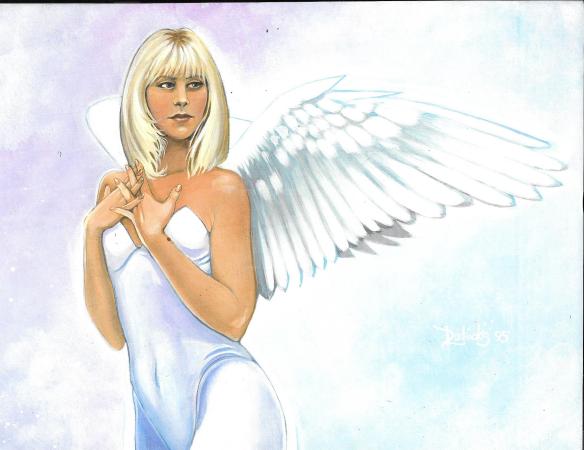 When it comes to wealth and/or physical possessions I have always tried to stay negotiable in that any amount of my money or any possession was “negotiable” if a friend or family was in need. For example during our wilderness years in Eastern Tennessee my sons could always tell when we started our Christmas shopping because it was as that point that my CD collection would start to shrink as I started selling them to finance the purchase of gifts.

I’m not nearly as generous with my work – it’s tough to let it leave my possession and I won’t sell a piece of art now without a very pressing reason…but the most difficult “departure” for me involved a piece of work that wasn’t even finished. It was twenty-five years ago and between caring for our newborn daughter Meghan and teaching an early-morning religion class My Beautiful Saxon Princess had little time for painting and had little to show for an upcoming convention. On the other hand I had three paintings started, one of which showed a lot of promise so push-over that I am I wrapped it up and put it under the tree for my sweetheart.

Not many people would start to sniffle at the sight of pencil lines on primed Masonite but then My Beautiful Saxon Princess isn’t most people. I’d gone through several overlay/steps to get the drawing just right and the underpainting I’d included neatly indicated all the lights and darks which made finishing the picture both timely and painless. The signature is different from the way either one of use routinely sign work but then it’s probably the closest to a true collaboration we’ve ever done – evidently a good thing because it both swept awards and sold immediately at the convention.

Shelly and I were like two ships passing in the night1 – whenever our paths coincided there was always something to prevent any sort of relationship from happening. She was a friend of one of my younger sisters so I’d already known her for a few years when we dated in May of 1974, but when June rolled around I was off for my bicycle penance in New England. When I came home two years later she was one of the first people I looked up…but she was in a steady relationship. That relationship had fizzled by the next summer and when I came home from school in May of 1977 she was very glad to see me until she realized that the young lady she assumed was my “really cute cousin” was in fact my Beautiful Saxon Princess, whom I’d wed three weeks earlier. Shelly was embarrassed…until I told her about an even more awkward case of mistaken identity five years earlier.

I’d arrived in Rexburg with little more than the clothes on my back, having worked out at Swanson River until the very last minute. After a sleepless night shivering on a mattress with no sheets, blankets or pillow I went downtown shopping for some bedding, accompanied by my Best Friend to keep me on task and make sure I didn’t get sidetracked by bookshops or record stores.

JC Penny’s was our first stop and I was able to get most of what I needed there but as we’d set aside the entire afternoon for shopping we decided to visit a few more stores – having travelled so light I also needed some shirts as well. I soon became apparent that I wasn’t going to find clothing as quickly as I found bedding because the next two places we went through carried nothing but Western-styled clothing. I had just about resigned myself to playing mail-order roulette when we came on a decorated doorway and stairs leading down to lower-level shop which blessedly sold clothing that didn’t look like it had been designed/manufactured in 1957.

I was in the process of selecting a few shirts to try on when a sales clerk came up to help. After a short discussion about styles and prices he stood, smiled and said “Well – I can see what’s going on here!” Struggling to determine which sin was so obvious I turned red-faced and cleverly replied “Urrkk!” to which the clerk laughed softly and continued “No – it’s obvious you’re here to help your younger sister get set up at school!”

Even more confused I glanced around looking for the little sister who’d somehow stowed away on my flight down from Alaska … then stopped and looked closely at My Best Friend, then looked at the both of us in the mirror. For the first time I noticed that with her sharp nose, hooded eyes and full lips there was a slight familial resemblance, made even closer by my collar-length hair, parted in the middle and sun-bleached from a summer working out on the lease. I’d also put on a couple of pounds so my features were a little more rounded…

He’d been talking about us.

We looked at each other, shuddered then quickly paid for the shirts and left for our respective apartments and when we met up again later than day I had my Ricks-approved short haircut and My Best Friend had applied just a touch-more makeup than she usually did for day-time.

…and we must have been equally creeped-out by the subtle incestuous overtones because the incident was never discussed afterwards.

There was a soft group-chuckle at Shelly’s “misidentication”, but as we stood there I glanced over at our reflection in the glass windows in the Nordstrom’s storefront and wondered for the first time if perhaps something subconscious had been at work when I’d first met my wife.

…no one would ever, ever confuse us as siblings.

In our never-ending war against clutter an occasional gem will float to the surface, as was the case last Sunday when I found a little black & white photo in a pile of papers I was sorting. It dates from March of 1977, it was taken at the BYU ROTC/AFROTC Military Ball, and was taken shortly before we got married. Despite the fuzzy focus it remains one of my favorite photos as perfectly captures not just our appearance but the essence of the moment.

…and even though more than 42 years have gone by the same can be said for the other photograph in today’s post , that “capture-the-moment” vibe is still there. It’s a different kind of moment now, but one that is just as precious to me.

Most people don’t realize that my Beautiful Saxon Princess is an incredible artist in her own right, that we first met in an art class,  and we worked side-by-side as freelancers for twenty years. Unfortunately my struggles with A/S and repeated bouts with upper respiratory infections got us both wondering if I’d see the other side of 55 so we jumped through all the hoops to get her moved into education and a more secure income.

She still takes time to make art, only now it is art-for-art’s sake rather than commerical work so she gets to pick-and-choose and can take as long needed with each project to insure stunning results. This folksy decorated table was a small metal shop table I inherited from Dad that is being put to much better and more colorful use.