There’s a point in airborne operations where the operation itself takes over reality and you become an element instead of an individual. It happens when:

At that point you’ve become a round in belt of machine-gun ammunition and you are going out the door. Oh, you’ve been taught the procedure for refusing to jump but believe me – you’re going out that door…but it’s OK.

…that’s because it has transformed into a Zen feeling/experience – it’s out of your hands.

I’m hitting that point with Midnight Son. We’ve gone through the final edit and the cover art is done, needing just a bit of digital juju to get it ready for the press, so I figured I’d give you all a  sneak peak of that art: 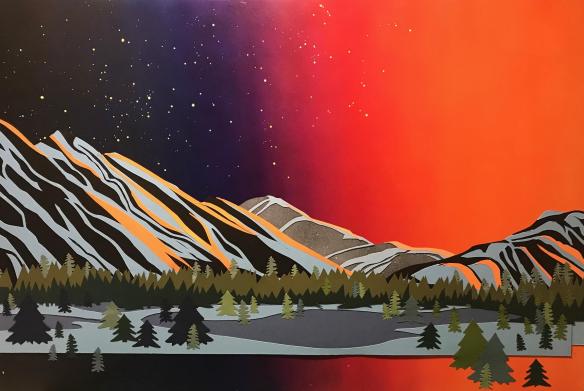 I wish I had a better copy of this photo. It was taken at Ricks College in the autumn of 1973 during the most successful semester of my collegiate career, but like most of my undergraduate semesters I was flat broke and couldn’t afford any of the photo print packages. This image was scanned out of a yearbook published back when color printing was a luxury rather than the rule.

This is the first time in forty-six years I’ve looked at this closely, and as I look it over two questions come to mind:

No need to dig out the old Hanna-Barbera VHS tapes – there is no “Jadex” among the Herculoids, at least anywhere outside of the Deitrick household. My Star Pupil and I spent last Saturday morning doing what Saturdays were made for: watching cartoons. We spent a lot of time with the old H/B action shows like “Herculoids”, “Jonny Quest” and “Space Ghost” and once I was able to muzzle the internal critic complaining about the absence of all three Laws of Thermodynamics we had a good time

We were at most seven minutes into our session when it became evident the team needed an extra member bearing a strong resemblance to my Star Pupil.

When NSCC kicked me to the curb last summer my Beautiful Saxon Princess told me that the only thing that had  changed was  the size of my classes. –  before I had anywhere from  25 to 30 students but now I just have one – my grandson Jayden.

I couldn’t agree more. Jayden is just the latest in a succession of kids growing up in my studio. We had a great day in the studio today learning about sculpture and sculpting tools and as  we were finishing up BSP decided to take pictures. 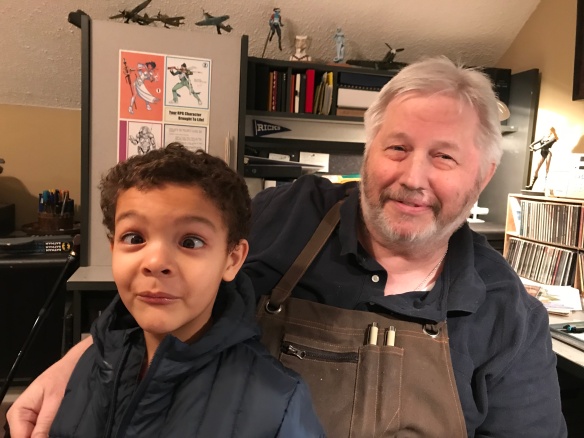 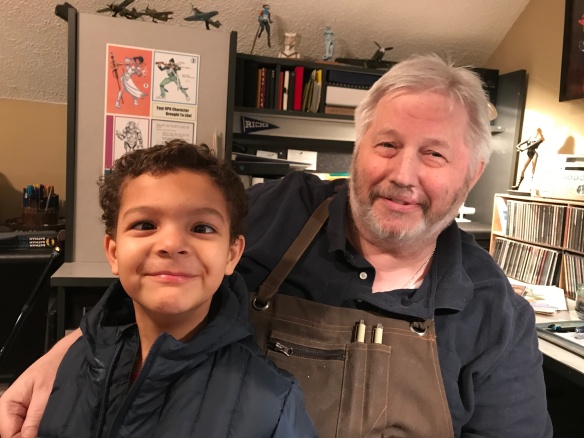 Nostalgia rather than fear was the overriding emotion in our home during the March 1964 Earthquake. As we had been living in that howling wilderness otherwise known as Spenard for less than two years we styled ourselves as  temporarily  transplanted Californians rather than locals so the first few tremors brought on smiles and “Hey – just like back home” rather than any expressions of fear. It wasn’t until we lost our television signal (and the closing scenes of the “Invasion” episode of  ‘Fireball XL5)  that I began to feel  any emotional distress.

However things were a little different during today’s quake– I was chatting on the phone with my sister Heather when she stopped for a moment then said: “Oh boy…earthquake!See the hanging lamps? – they’re bouncing all over the place.”

Intestinal Stukas  started churning my insides as I nervously glanced around my own living room,  but I was puzzled to find all our lamps perfectly motionless.

Suddenly the proverbial  lightbulb flashed on  and I made a conclusion of my own:

For my dad aviation was the best yardstick for measuring the march of progress – he was born into a world with biplanes and lived to see television broadcasts of regular shuttle service to  the International Space Station. For me it’s been phones: 55 years ago a call from Tennessee to Alaska would have been made only under the most dire circumstances, taken the help of at least three operators and would be made using a device that could not be owned by an individual – it  had to be  leased from the phone company.

I’m still getting used to it.

As promised listed below are the sources for the quotes listed in my 19 NOV 2018 post:

“Gentlemen, we’ve got a date with destiny, and it looks like she’s ordered the lobster” by Neil Cuthbert and Bob Burden in  the 1999 movie Mystery Men

“Mists soft and transparent as excuses flapped across pastures the color of crap-table felt” P.J. O’Rourke from the chapter on Paraguay in his 1992 book Give War A Chance.

“She had that mistreated and neglected look, like an encyclopedia that had been owned by stupid people”. A pre-Dragnet Jack Webb from the radio show Pat Novak for Hire

“I’m not saying it’s been too windy, but there’s a witch’s feet sticking out from under the house and everything’s in color: by Steve Pritzker in the “A Dark and Stormy Night” episode of the TV series Silver Spoons

It takes a certain level of hubris to “live out loud”1 as a columnist or blogger – you have to have a fair amount of confidence in your ability to crunch words in an effective and entertaining way.  I do a pretty fair job, but there are times when I’m taken down a notch or two –  humbling moments that involve me coming up against a passage in someone else’s work that just so FREAKING GOOD it knocks me back on my literary fourth-point-of-contact

Recognize any of them?

I’ll share the sources in a day or two.

There’s been a disturbing trend developing in the telephone solicitations I’ve been getting lately. No, I’m not getting unduly large numbers of calls nor have I had anyone make any threats – I’m getting mostly robo-calls – recorded messages, a practice that is purportedly does away with the restrictions of do-not-call registry  but has also taken away one of my favorite sources of entertainment.

As I’ve written earlier I like to mess with telemarketers, and in the last couple of months I’ve come up with a response or two that definitely fluster an unwanted caller:

I’ve gotten great responses with all three of this but it’s no fun when I pick up the phone and the first thing I hear is the whirr of a recording.

I’ve yet to figure out a way to scare a machine.

Here’s something you can do the next time you become overly impressed with your own brain-power:

Explain maps to a five-year old.

In these times of smart phones and GPS navigation few people refer to “a graphic depiction of a portion of the earth’s surface” (as the field manual used to put it) but  I am one of those hold-outs for which actual paper maps figure prominently in trip planning.  However when I had my Rand McNally out the other day my grandson Jayden became very interested. It probably was the novelty of the large format, spiral binding and informational color scheme that caught his eye, but when I gave him the aforementioned field-manual definition of the word map he really lit up.

Mind you, Jayden’s  grown up in an artistic household so the idea of an image representing something else is a concept he already has a handle on….but when he tumbled to the idea that the pictures (maps) conveyed additional  information the questions started shooting out like a Uzi on full automatic. Some of the issues were easy to resolve –  like when we located Clarksville on the map, and found where his cousins his cousins live, but then the questions became both more esoteric and detailed:

…and many, many more.

It was one of the very few times ADHD worked to my advantage; while I was stumbling for answers he had already moved on ( and through) four other topics.

I spent a good portion of the 1970s working as a roustabout for Chevron USA out at the Swanson River Oil Field on Alaska’s Kenai Peninsula. T.H. Auldridge was the gang foreman, and I give him as much credit as any other human being for anything I may have become or accomplished in my life. He fought across Europe as a tank destroyer commander during WWII, and despite the lack of a college education or any sort of management training, he was one of the best leaders and smartest men I have ever known.

He was Texas-born & bred and as such was prone to uttering “colorful” observations on life, most of which are not printable in this particular forum. Of the ones that were printable my favorite was “The next time you think you’re a big deal just try to give an order to another man’s dog”,

I’ve had that principle reinforced in my life countless times in every field of endeavor I have worked in – especially in my creative work. During all the years I worked as a freelance illustrator I took pride in my work, especially my 100+ game covers and the conceptual designs  I did for BattleTech, Traveller and most recently the Gun Kingdom books written by R. Scott Taylor. I look at those images as my signature work, but do you know what my most heavily published, wide-spread work is?

From 1998 to 2008 Lori and I created linework for a series of kid’s puzzles published by Patch Products. We would create black & white line images that in-house artists would scan/shade/color via Photoshop for use in puzzles sold through Wal-Mart.

That’s right – those 11”X17” kid’s puzzles that are bundled and shrink-wrapped eight-to-a-package? The ones displayed on the end-caps of the toy aisles.

That means that years from now when the gophers are bringing me the mail I won’t be remembered for BattleTech, or Star Trek licensed work or the fine art I create – I will be memorialized by insects, dinosaurs and cars.

…and as much as I’d like to think that my writing will make more of an impact that my art, I am jolted back to reality whenever I check stats on this page. It’s not the stories from my youth, the commentaries on music or reflections on life that get the most attention.  The single post that gets the most views – the one piece of writing that has been seen the most by people around the world.