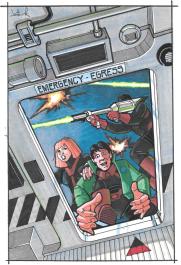 One of the last projects I did for Game Designers’ Workshop was the cover for the Traveller: New Era supplement Path of Tears…and like just about every work of art I’ve created there are stories involved in the making of the painting. For example, I’m sharing both the finished art (left image) and the preliminary comprehensive sketch (center image) that had to be approved before I started work – but I’m also sharing my first concept for the cover (right image) that was rejected as not having enough action.

…and then there are the figures themselves.

When the cover was published I took some good-natured ribbing from friends for hubris I was showing by using myself as a model for the central character…except this was painted in 1993 and by that time my sons were teen-agers and accomplished models, so it was my older son Conrad that served as the model for the central character. He just happened to have developed the Deitrick “look” by that time.

You may also notice that the group was a bit more diverse than was expected for a gaming supplement in 1993. GDW was always good about that sort of thing, especially it wasn’t an effort at political correctness on my part but rather my own inherent “there’s room for everyone” mindset that made the original Trek series a favorite when I was in my early teens.