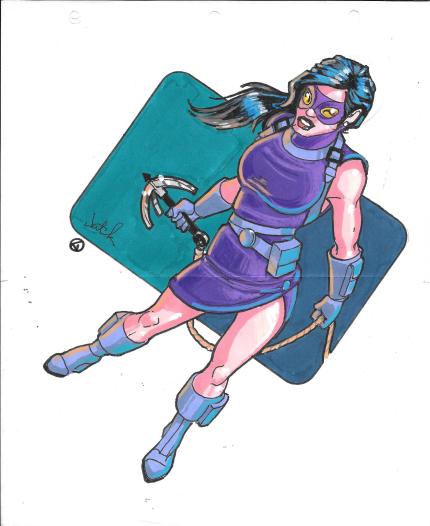 Another page from my sketchbook: Nightshade, a back-up character from  Charlton Comic’s Captain Atom book. Sketchbooks are good place to experiment and my books  end up with a lot of drawings from unexpected POV’s,

It’s  always a challenge to update old characters – I mean how much do you change before they start to lose identity? Added to the challenge is the shallow depth of detail in most Silver Age heroes: comic work doesn’t pay very well now and paid even less fifty years ago. The emphasis was on speed so the fewer wrinkles, seams, belts, tools and such the better and it wasn’t unusual for pencillers to see their work gutted by inkers who omitted detail and resorted to heavy shadow area just to increase daily page rates.

In some ways superhero costuming has hit a baroque – almost Rococo level of excess detail. I think  Michael Keaton’s original bat-suit/armor as designed by Jim Ringo for 1989 version of  Batman had the ideal degree of detail.