1977 was an interesting year. Jimmy Carter was sworn in as president, disco swept through the pop music industry like a vampire in a blood bank and Star Wars permanently warped reality for an entire generation of junior-high boys.  It was also the year I got married…and the year that I narrowly avoided getting killed several times. I don’t know if it was bad luck or the “bullet-proof” mentality that plagues young men in their mid-twenties but marriage and widowhood came close to synchronicity with Lori that year.

It wasn’t the first brush with eternity though –I’m an Alaskan boy and life is quick on the last frontier. Within ten years of graduation there were a half-dozen deaths out of my high school class of 150, which is not a big surprise considering how extensively Alaskans are involved with boats and airplanes.  Three of my own near-death episodes stand out because they happened in rapid succession right as we were making the trip up the Alcan right after we got married in April. That’s right – within three weeks of leaving single life I came close to leaving life in general.

Lori and I had been on the road less than a week when the first incident happened. We’d started our journey out by driving west to the Oregon coast to visit my sister Robin and her family.  Engine trouble  stretched our planned three day interlude to a week;  while repairs were being made  Lori helped with Robin’s new baby Gordon but in true Alaskan fashion I passed the time helping my brother-in-law Bob prepare the equipment and boats he would use in the coming summer as a commercial fisherman.  Regulations in those waters required catching the fish with hook and line rather than the nets I was used to seeing back home in Alaska. That meant the boats were a bit different than Alaskan boats, but Bob’s boat was even more unique – it was made out of cement.

The correct term is “ferroconcrete hull technology” but it’s the same cement used to made sidewalks and floors. A form in the general shape of the hull is made out of plywood, steel mesh is strategically placed and wired to rebar, then cement is poured in and allowed to set. When the cement has completely cured the construction is extremely strong and as buoyant as any other form of vessel, the only drawback being a markedly heavier weight.

The weather turned sunny and it seemed like a perfect time to work on the boat. The only problem was getting to it; the boat was shoe-horned into their garage and their garage was located in the basement. Fortunately this basement-garage had a door and recessed ramp at one end so getting the boat out wasn’t so much a lost cause as a difficult one. Bobby’s truck had a winch that we’d use to pull the boat up and out of the garage and if there were any problems I could reach down from the side of the ramp and add a little brawn to the equation.

Bobby started winding the winch and everything was going great, with the pawl click-click-clicking as it fell and locked into each successive notch on the gear. Suddenly I heard a click-PING! and the boat started rolling back down the ramp. Without thinking I hopped down into the recessed area so I could get a better grip on the side of the boat.

Yes, you read that correctly. I tried to catch and hold a twenty foot ferroconcrete fishing boat weighing several tons. I grabbed the side of the trailer and tried to stop it, realizing the foolishness of my bullet-proof mindset only when the space I was standing in got smaller and smaller as the boat ran back down into the basement garage. When it finally rolled to a stop I had at most an inch worth of clearance between the sides of the boat and the cement block wall at the side of the ramp. I avoided peeing myself only because my wife of two weeks was watching me, cheering me on, totally oblivious to the brush with death I had just experienced.

The second close encounter with the Reaper came about a week later. We finally got the truck running again and then drove to Seattle to spend three days visiting with friends of Lori’s family before entering Canada. Traveling under rustic conditions was a little more taxing than Lori had anticipated and sleep became very difficult for her once we hit the gravel past Ft. Saint John. The highway had been built under military specifications during World War II to provide a land link to forces stationed in Alaska. At the time there was a valid fear of Japanese air attack on the road so in order to keep convoys broken up and scattered the highway curved and looped even when a straight stretch would have been more convenient. Population growth in Northern Canada and Alaska combined with construction of the pipeline had triggered efforts to straighten and improve the road but there were still lots of road sections comprised of loop after loop after loop, with huge lake-puddles that were slow in draining because the engineers didn’t bank the countless curves in order to save time. Unbanked curves are never fun to drive and the hordes of semis we had to share the highway with made them even more “white knuckle” to negotiate.

We were a day into the gravel and not far from Watson Lake when Near-death Incident #2 happened.  A rainstorm had been following us for two days and I was driving faster than was prudent hoping to find a motel room that would give us better rest than we’d gotten sleeping in a damp tent up to that point.  As I crested a ridge I could see the lights of Watson Lake in the distance but as our trunk roared to the bottom of the ridge there was a giant SPLASH and all the lights went out.

….and I mean everything. No lights in the distance, no stars, no headlights or dash lights. I had hit one of the aforementioned giant lake/puddles and the muddy water splashing up had covered the entire truck while stalling the engine and killing all the lights in the process.

At that moment a Prudhoe Bay Special crested the opposite ridge and came barreling down towards us, cutting through the arc of probably what appeared to the driver to be just another empty lake/puddle in another unbanked curve. I reached down and worked the latch, opening the door a couple of inches and illuminating the dome light, which made us just visible enough for the oncoming driver to notice us and swerve to one side, horns blasting.  Our truck coughed to a start again and I drove to a small inn just short of Watson Lake where I half-carried my sleepy sweetheart into a room and tucked her in. As my heart was still beating like a hummingbird’s, sleep didn’t arrive for some time, so I spent the interim saying prayers and hoping the balance of the trip would be not quite so enervating.

The third brush with eternity wasn’t quite as close or literal as the first two but it taught me a valuable lesson nonetheless. When Lori and I first started talking marriage we both made a lot of assumptions. As we shared a faith and set of values, had similar interests and came from roughly equivalent income level and family sizes I assumed that work habits and humor would fall right into place as well. My third “brush with death” taught me how mistaken I was.

I was already discovering vast differences in the way Alabama girls and Alaskan girls defined “roughing it”.  As we neared the end of our trip it became evident that there was no way my Saxon Princess would meet my family without a chance to change clothes and freshen up. We were coming down out of the mountains between Gunsight Lodge and Sutton when I suggested that we stop and have lunch at Renaldo’s in Anchorage where we could eat a nice meal and then clean up and change clothes.

We spent the next couple of hours chugging along, Lori “oohing” and “aahing” at each new beautiful Alaskan vista and wondering what fine cuisine she would order when we got to Renaldo’s in Anchorage….and at that point I began to get a little nervous.  My nervousness broke into sheer panic when we pulled up to the McDonalds on Dimond Boulevard in South Anchorage. Lori looked at the sign, looked at me with a totally bewildered expression, then gazed back at the sign. I garbled some sort of weak joke about “Ronald McDonald….Ronald = Renaldo’s… family joke” but it was to no avail.

It was a fitting end to a journey stocked with near-fatal incidents. The temperature in the cab of that truck dropped at least 50 degrees and hovered just above freezing level for the remaining 140 miles of the trip.  I have faced north winds buffeting down an airstrip in the middle of nowhere Alaska that had more warmth than that look had, but lucky for me any grudge my sweetheart may develop has the life-span of a snowball in direct tropical sunlight so she was talking to me again upon arrival in Sterling – and it was at that point that I made two important vows: 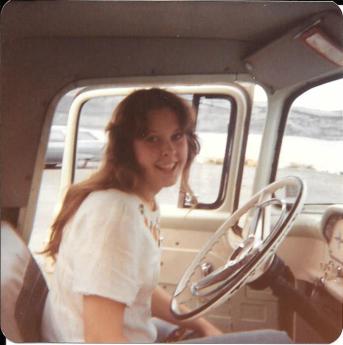