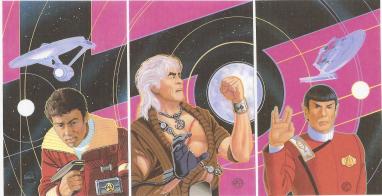 Shortly after we moved to Clarksville I was contacted by IDW Comics to do a trio of covers for their ‘Wrath of Khan” adaptation. I was elated to get the project, sure that I had finally cracked the comics market in a big way…until I found out that I was basically a nostalgia act. The decision had been made based on my covers for the Star Trek role-playing game from the 1980’s rather than on anything recent I had had published.

Then they told me that my covers would grace the “dealer incentive copies” of the print run – dealers would have to order twenty-five of the regular issues before they could order one with my art. Again, it  seemed like a good deal, my work being the Holy Grail and all until I determined that IDW Trek books were not exactly flying off comic shop shelves, which meant very few of my covers would be sold.

I fussed about it for about three minutes, then figured that if Steven Stills, Joe Walsh and  Blood, Sweat & Tears  could do the nostalgia circuit then so could I.

I designed the covers to work together in a triptych of sorts, which given the degree to which some fans venerate the Trek world is more accurate term than you’d think.  I’ve had complaints from readers that all the graphic devices and lines don’t match up precisely; all I can say is there are always trade-offs with printed work as it goes through preparation for the press.

Since my recent post of the Spock cover included the masthead I’ve left them off this image. This Kirk differs from the actual printed version; shortly after submitting the JPEG I got a call from the editor wanted a more aggressive expression which I dutifully painted and resubmitted. Somehow the original image made it to press instead of this one.