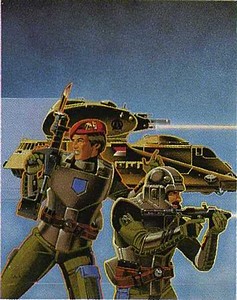 The concept of ground forces for Starfleet was a conceptual black hole for me. I started sketching and planning the night after watching “Star Trek: The Motion Picture” for the first time; I was intrigued by the helmets and body armor the security people wore ( an idea that was long overdue if you ask any redshirt) and as I was a fairly new second lieutenant in the Army the whole “soldier” thing was pretty important to me.

I kept at it for the next couple of years and when I shared some of my ideas with Jordan he jumped right on the idea. However, the gestation of the actual supplement ended up being a little too drawn out. By the time the book was ready to go to press it was late 1987; with the success of Star Trek IV: The Voyage Home and the hype over the upcoming Star Trek: The Next Generation Gene Roddenberry was back in the driver’s seat and he was adamant that there would be no “marines” in the Star Trek universe. He felt that regular Starfleet security teams would handle any ground combat.

You have to give The Great BIrd of the Galaxy his props – after all he spent some time as a bomber pilot in WW2, but I’m not so sure about this one. You’re going to take a master-at-arms – or an M.P. , tap them on the shoulder and all of a sudden they’re SEALS?