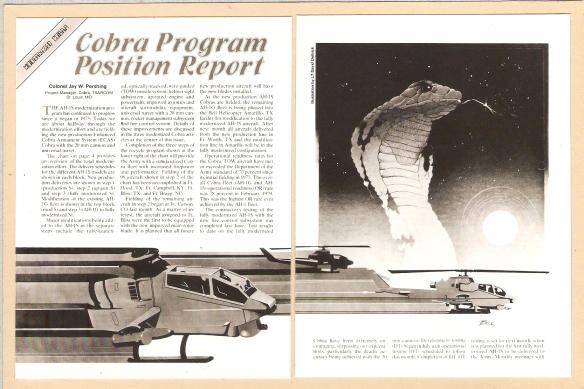 Most of my classmates in ORWAC (Officers Rotary Wing Aviators Course) 44-79 used their weekends for beer, water-skiing and a little study. I also studied, but instead of beer and water-skiing I spent time with my family – and making art.

I did some work for Howard Thompson at Metagaming, but I also did a fair amount of work for the U.S. Army Aviation Digest. They couldn’t pay me, but I figured having printed samples of my work was worth the effort. I just asked for long lead times so drawing wouldn’t interfere with study. For example, I did this piece over Columbus Day 1979 but it didn’t see print until January of 1980.

This version is a little disappointing at two levels. First, it was a two-color piece, so I airbrushed in the large areas with black and turquoise ink. The original is quite dramatic, but the printer used a “duo-tone” process which robbed it of a lot of “pop”. Secondly – in 1983 I sized the printed double-spread tear-sheet to fit the portrait format of the rest of my portfolio. At the time color copies were not an option and I eventually I lost the printed version leaving me with this dull black & white version.

There is also a technical mistake, though I doubt if anyone will find it….